Civic and leadership trainings, GBV with a focus on FGM

President Uhuru Kenyatta has promised that he will end FGM by 2022. Speaking during the signing of a memorandum of understanding by cultural and religious leaders from twenty counties which are identified as hotspots for FGM, the president promised that he is committed to a harmonious strategy to end FGM.

‘FGM is the worst form of Gender-Based violence. It is a retrogressive practice. We need to be a society that protects and respects women to protect our individual and national conscience”, said President Uhuru Kenyatta.

‘If you hear or see a chief or assistant chief presiding over a ceremony of mutilating girls, you should tell me. I promise to deal with him/her. I will do everything within my capacity including rallying the leaders of other regions to support the End of FGM”, he added. The promise comes after his commitment to end FGM during the Women Deliver Conference on gender equality and the well-being of women. 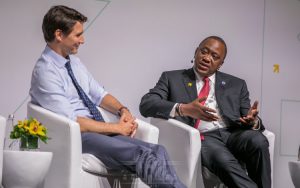 The 28TooMany organization estimates that at least 9.35 million girls have undergone FGM. The number accounts for 6% of the number of women who have been mutilated and violated globally.

“The President’s promise is ambitious. However, it is achievable”, Sadia Hussein, an anti-FGM activist working with the Dayaa Women Group.

Progress has been made in reducing the prevalence of FGM since the adoption of the Prohibition of the FGM Act 2011 . However, the process of eliminating FGM is still slow. Therefore, all eyes will be on Uhuru’s administration and anti-FGM organizations, networks, and movements to see how the zero rates in FGM will be achieved.

Your ticket for the: President Uhuru Kenyatta Drums Support for the End of FGM in Kenya